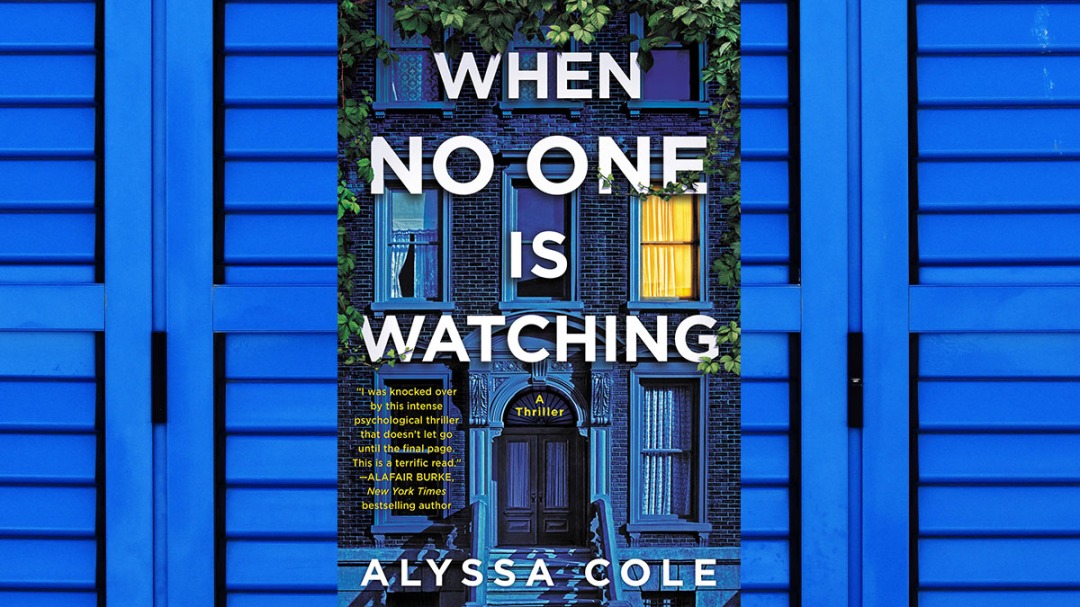 When Neighborhoods Dissolve: Review of When No One is Watching by Alyssa Cole

Neighborhoods are a form of history. They grow depending on who inhabits them, changing shape and telling the stories of who was once there, who lived and died and abided. They root people, telling them where they came from and offering a structure for their memories. I grew up in a small neighborhood in the middle of the Missouri Ozarks. Outside our little cul-de-sac were miles of undeveloped rolling green hills where my mind could wander alongside the cows and horses. Even though I haven’t lived there in years, I still remember the woods where I explored with my friends, the pond where I learned to swim, and the neighbor’s yard where my sixth birthday party was interrupted by a tornado.

In her 2019 thriller When No One is Watching, Alyssa Cole explores the connection between environment, identity, and loss. Lauded as the love child of Get Out and Rear Window, the novel follows Brooklynite Sydney Green as her neighbors seem to disappear overnight and gentrification dons an even more insidious facade. Lifelong friends vanish as expensive condos replace aging brownstones and bodegas, and Sydney struggles to balance these changes with piling bills, the end of her marriage, and her mother’s failing health. Desperate to cling to her roots and make sense of the chaos around her, Sydney begins researching her neighborhood’s history and finds a possible ally in her new, mysterious white neighbor Theo. Together, the two must learn to trust each other and race against the clock before they too get lost in the vanishing neighborhood.

It takes skill and innovation to weave traditional thriller elements with important social justice issues, and Cole stands out by blending past with present and reality with fiction. The story depicts the lasting scars of history’s many horrors against BIPOC communities by balancing grief with painful honesty. She writes that “people bury the parts of history they don’t like, pave it over like African cemeteries beneath Manhattan skyscrapers.” And they do, in this fictional neighborhood and the real marginalized communities it represents.

Besides the enticing premise of blending Hitchcock-esque thriller elements with topical social justice issues, the characters are realistic depictions of people doing their best to overcome traumatic experiences. Sydney struggles to come to terms with her mother’s declining health, crippling debt, and the fallout of escaping her toxic marriage. Theo has a mysterious, rootless past he doesn’t like to bring up, which makes him long for a community like the one disappearing before his eyes. The first-person narration gives the audience a candid view of Sydney’s exhaustion as a Black woman with the world against her, letting us step into her shoes.

The relationship between Theo and Sydney is also unexpectedly refreshing. Their mutual trust and respect develop as a slow result of shared conflict and it’s a careful, hesitant bond on both sides that recognizes the historical trauma inherent in such a relationship. It feels more natural than most romances found in thrillers: their connection doesn’t exist to prop up the plot; rather, it feels like a natural evolution of an unlikely friendship. And yet it still works.

But while the story unapologetically depicts the unpleasant reality of gentrification in BIPOC neighborhoods, it doesn’t really work as a suspenseful thriller. Cole spends most of the book building up to the climax, which is then resolved in less than ten pages. It’s especially frustrating, because Cole spends hundreds of pages teasing a big reveal, but once it happens it ultimately falls flat. It just doesn’t have enough time or space to develop. Even throughout the rest of the book, the twists are hit and miss. Some are shockingly surprising and hit just the right notes, but others miss their mark because the audience just isn’t given enough time to invest themselves in the conflict or react and grieve with the characters. In fact, the book struggles to successfully weave together its multi-genre promises. It bounces between historical fiction, mystery, romantic comedy, urban fantasy, and realistic fiction without ever really committing to a single tone or successfully uniting the different stylistic elements.

Most disappointingly, the central conflict fails to deliver because it pushes the bounds of believability. While the message of combating gentrification is certainly powerful, it would be stronger if the conflict was less overtly sinister. Though the villains represent the very real, very terrifying threat of systemic racism and the immeasurable damage it causes to POC communities, the characters are almost cartoonish in their racist behavior and comments, and they consequently lose some of their impact and credibility with the audience. We already see the traumatic and long-lasting effects of systemic oppression in the story through heartbreaking scenes of police brutality, incarceration, and threats made towards Black women. It’s sad that their emotional reverberations are weakened by the unbelievably overt comments the villains make.

Ultimately, despite its structural and technical flaws, When No One is Watching is still a worthwhile read for its skillful blending of urban New York history and contemporary social justice issues. The themes of loneliness and losing one’s community feel especially relevant in today’s disconnected climate where everyone feels isolated and lost from social groups due to the pandemic. As so many of us deal with times of hardship, it might help to remember Sydney’s neighbor’s philosophy in the book: “‘They can break, but they can’t erase … they can build but they can’t bury us.’”

Alyssa Cole is an award-winning author of historical, contemporary, and sci-fi romance. Her contemporary rom-com A Princess in Theory was one of the New York Times’ 100 Notable Books of 2018, and her books have received critical acclaim from Library Journal, BuzzFeed, Kirkus, Booklist, Jezebel, Vulture, Book Riot, Entertainment Weekly, and various other outlets. When she’s not working, she can usually be found watching anime or wrangling her many pets.

When No One is Watching can be purchased here.

Lillian Marsh (she/her) is a staff writer at Berkeley Fiction Review and a Research Fellow at Ms. magazine. She can be found on twitter @lilyrmarsh. View all posts by Lillian Marsh