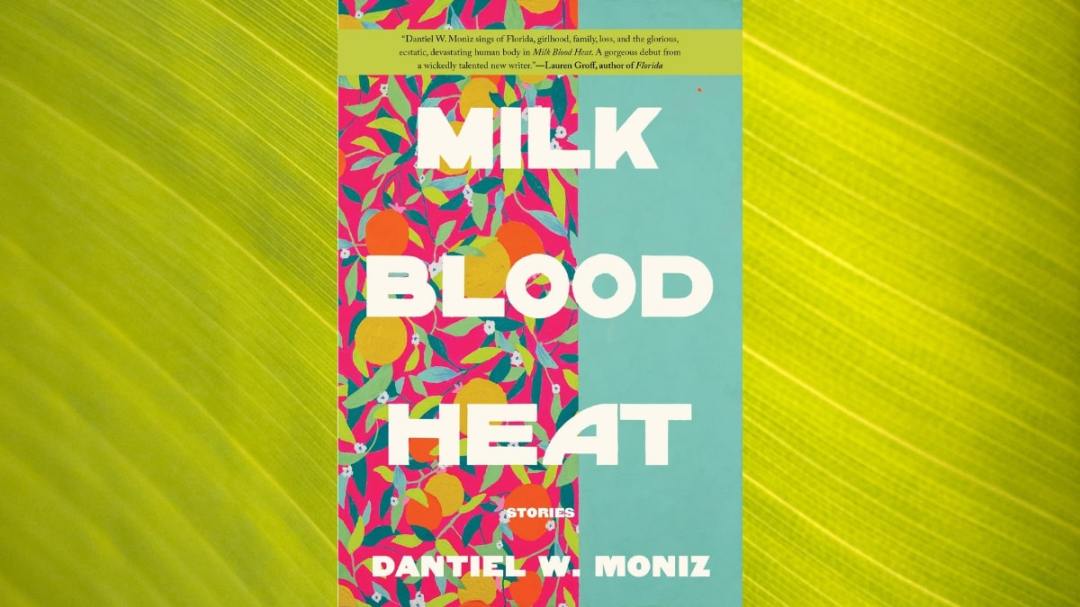 To Death and Back: Review of Milk Blood Heat by Dantiel W. Moniz

“Actually the phrase might be: The blood of the covenant is thicker than the water of the womb.”

Dantiel W. Moniz’s debut story collection, Milk Blood Heat, pulsates with the everyday horrors of being alive. For many of her characters, being alive means coming face to face with death, which assumes many forms in the collection: the sizzling out of a romantic relationship, the absence of a heartbeat on the ultrasound, the weight of an urn resting on one’s lap.

Situated in tropical Florida, the collection’s eleven stories present an array of intimate relationships in which characters have no option but to grapple with the uncertainty that comes with endings. Whether by uniting mothers and daughters or edging couples and cousins toward the tipping point of their relationships, death is a vehicle by which Moniz pushes the boundaries and excavates the essence of these intimacies.

Often, the closest bonds inflict the deepest wounds. “Outside the Raft” follows the relationship of two Black girls: Shayla and her cousin, Tweet—the latter of whom resides with her grandmother because her parents are incarcerated. The girls are best friends, but at times there is a tension that creeps between them due to Shayla’s familial privilege and Tweet’s lack thereof. The story’s pivotal moment occurs when Shayla and Tweet are out with their family for a beach day. Shayla, Tweet, and a few other cousins are on a raft in the ocean when trouble ensues, triggering Shalya’s fight-or-flight response. In her desperation to stay afloat, she puts Tweet’s life in jeopardy, forcing her to confront the darkness swirling deep within herself.

“The Loss of Heaven” also explores the inner workings of an intimate relationship through impending death. The story is told from the perspective of Fred, a 50-something-year-old man struggling to accept his wife’s decision to quit chemotherapy. Terrified of the prospect of living without a partner and, thereby, ashamed of this fear, he fails to communicate meaningfully with his wife, hardening their already brittle relationship. One day, when his wife takes a trip to visit her family, he finds himself at his usual haunt where his most-prized possessions (ego and car alike) take a hit, leaving him with nothing but himself and his own reflection.

Moniz further challenges the sanctity of relationships on a macro level in “Necessary Bodies.” A young pregnant woman considering an abortion contemplates the implications of bringing another human into a planet that’s already on the brink of climate-change-induced disaster. She searches the internet: “‘how many years FL underwater’ and ‘when will the sun go out’; intergenerational trauma and its biological effects.’” In such a way, Moniz is able to address relevant and universal anxieties about climate change, all while capturing a young woman’s hopes and fears.

With vibrant prose, Moniz presents a web of intimate relationships in all their complexity, and then works to untangle them through careful character development. The characters of Milk Blood Heat are left asking themselves: What does it mean to be connected to one another by blood? When does loving someone turn into an act of selfishness? Can our relationship withstand a lifetime? Were we ever meant to be?

These questions are grounded in ordinary settings, but through fantastical imagery, Moniz transforms everyday life into another dimension. The motif of water, in particular, as seen through the aquariums, oceans, and overflowing bathtubs that flood the pages of Milk Blood Heat, generates imagery that effectively reflects the depths of each character’s experience.

From meticulously executed twist endings to striking imagery, Moniz has an impressive handle on all aspects of the short story. Every story in Milk Blood Heat possesses an absorbing quality, establishing Moniz as an undeniable, new voice. Brave and self-contained, Milk Blood Heat will shake your very core, reminding us of the forces that connect us all.

DANTIEL W. MONIZ is the recipient of the Alice Hoffman Prize for Fiction, the Cecelia Joyce Johnson Emerging Writer Award by the Key West Literary Seminar, and a Tin House Scholarship. Her debut collection, Milk Blood Heat, is an Indie Next Pick, an Amazon “Best Book of the Month” selection, a Belletrist and a Roxane Gay Audacious Book Club pick, and has been hailed as “must-read” by TIME, Entertainment Weekly, Buzzfeed, Elle, and O, The Oprah Magazine, among others. Her work has appeared in the Paris Review, Harper’s Bazaar, Tin House, One Story, American Short Fiction, Ploughshares, The Yale Review, McSweeney’s Quarterly Concern and elsewhere. She lives in Northeast Florida and currently teaches fiction at the University of Wisconsin-Madison.

Sukhmony Brar (she/her) is a recent graduate of UC Berkeley where she studied English and Biology. She is an editor and staff writer at Berkeley Fiction Review and is a big fan of cats and the color yellow. You can find her on Twitter @sukhmonybrar View all posts by Sukhmony Brar