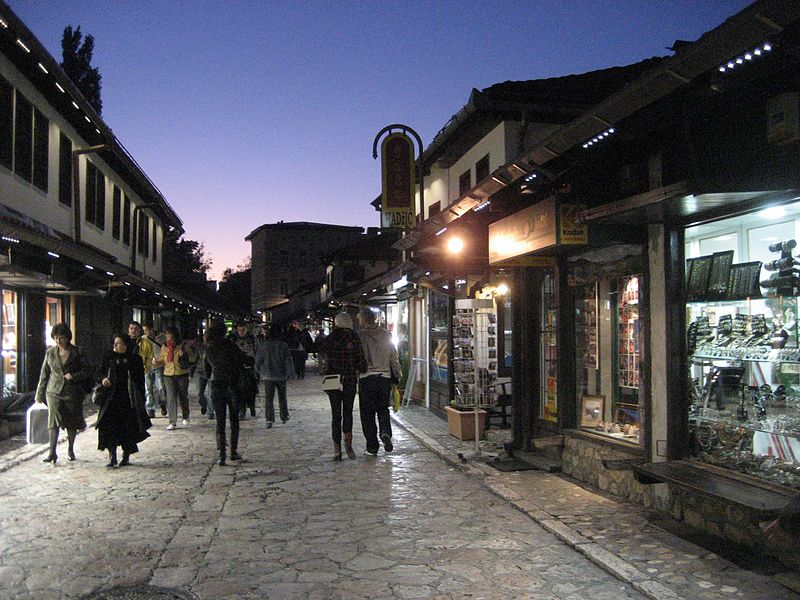 To almost all pedestrians, the cobblestone streets were most charming in the lamplight of evening. They were reminiscent of grander cities, or of grander times for the once triumphant city of Sarajevo. But, for Ethan, the darkness could not be illuminated by wane streetlights, and searching for street names and signs of the bus terminal was next to impossible. He used his limited Bosnian vocabulary to try and tell passersby that he was looking for the bus station, but it was useless. This town was not a common tourist destination and the locals were not accustomed to speaking with someone who spoke so poorly. He rushed along the many side streets and, after a number of ups and downs, reached his destination in a huff. He showed the attendant his ticket and boarded the bus.

The bus was mostly empty, and Ethan continued to the back where there was a girl, about his age. He put his coat and carry-on in the seat adjacent, and set his luggage on the shelf overhead. He settled into his seat, and closed his eyes. The air from the vents was cold but he began to fall asleep. The bus driver made some announcements in Bosnian, and the sudden motion of the bus’s departure jolted him awake. He checked his phone again, and saw that the bus had wi-fi. He connected to it and, checking his messages, found he had missed five. Two were from his mom. The first: “Hi Ethan, just wanted to let you know that your dad is in intensive care now. The doctors are doing what they can, but we don’t know much yet.” The second said: “Your father is in an induced coma and we are awaiting further news from the doctors. Hope you are travelling safely. Love you.” Ethan put down his phone. Outside his window the battered streets of Sarajevo passed by. He saw families inside their homes and couples out on the sidewalks.

He thought about what he would have been doing at home, three months ago. His mom would have been making dinner around this time, probably would have asked him to run to the store for the scallions she forgot. And then there was his dad. His dad would be in his recliner, staring gravely at a half-filled crossword. Ethan would hear the intermittent sighs and perplexed mumbles from his own spot in front of the TV, volume half way. He would turn over some conversation starters in his head. “Hey dad, want some help?” No, too belittling. Besides, he had to go get scallions.

He checked his phone again, twenty more minutes on the bus. He looked out the window again, and couldn’t help thinking about his family at that very moment, so far away, in a too brightly lit hospital hallway. Heels, pens, and keyboards clicking loudly, reverberating off the linoleum. They were probably crowded together in the stiff chairs, his mother with a box of Kleenex and cup of coffee idly in her hands. He thought of his dad lying in a room, alone, silent, except for the beeping of the heart monitor and fan of the air conditioner. He wished he could reach out and shake him awake.

He was suddenly alarmed by a shove. The girl adjacent to him was trying to get something from her bag. He looked at her with a surprised look and she apologized. He mumbled some words of reproach to her.

“Oh, you are American?” she replied.

“Sorry to bother, but I was thinking if you had a light,” she said.

It took him a moment to realize she was holding a cigarette and wanted a lighter. “Oh, no. I don’t smoke. Sorry.”

“It is nothing,” she said and waved her hand. She turned around and continued digging in her bag. A sudden bump in the road caused some articles to fall from her lap. Ethan reached down and gathered the things at his feet. He picked up a worn photo of a small girl in the arms of her father. They were standing in front of a brightly graffitied wall. He realized he was staring and quickly handed her her things.

“Thank you.” She put the things back in her purse and settled in her seat. “So, where are you going?” she asked.

Ethan sighed to himself, wishing for silence. “Home, to the U.S. To St. Paul in a state called Minnesota.”

“Minnesota? Hm, I’ve never heard of it. Perhaps it is very exotic, yes?”

“Not really, if you live there.” He stopped talking then and looked straight ahead, but she spoke anyhow.

“I am going home also. To a town called Grimauld in France. It is in the south and it is very beautiful there. My mother, and brother, and sister, and grandma are there. They will be very happy to see me,” she told him.

They arrived at the airport in a few minutes and Ethan collected his things and got off the bus. He walked over to the map of the airport and found his terminal. He heard someone walking towards him and the girl stood next to him, also looking at the map.

“My plane is in A. And yours?” she inquired.

“You are stopping in Paris?”

“Yeah, I have a layover there.”

“Me too. I think A is over there.” She pointed to the left. “Perhaps we are on the same plane.”

So the two walked in that direction and found a sign which indicated they were in the right place. They walked in the direction of an old bench by the windows overlooking the runway.

He put his things down on the floor, and she put hers there as well.

“My name is Nadine,” she said and put forth her hand.

They sat on the bench, and, together, they waited.